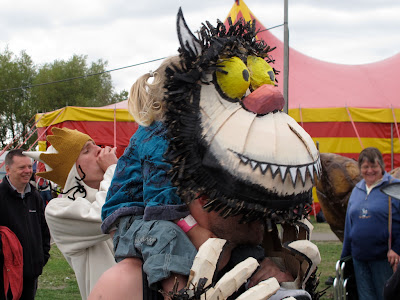 so last year, after greenbelt, i promised updates and reflections which never came. sorry about that, but basically GB10 was good, with the highlight being meeting up with tom hollander and james wood, the men behind the tv show 'rev'. i'd made the first contact which resulted in them coming to greenbelt, and thankfully it was a hugely popular and successful moment in the festival - i've been basking in the glory of their big-top appearance ever since... :-)

so then- onto GB11. i was basically responsible for programming visual arts things in the Hub tent. this year we themed it all to maurice sendak's classic 'where the wild things are' children's book and if you click the links you can see some of our lino printing and general wild-thing rumpus-making. the rumpus was possibly my all-time greenbelt highlight - due in large part to the various talents of harry baker who wrote a poem especially for the event and led the whole thing, rhys cowe, jay and claire - who made masks with punters and generally set the whole exuberant tone of the thing - and simon emery, who created an immaculate installation of max's room from where the whole thing was set in motion... it was a blast.

greenbelt is a place of extremes for me - it's so wildly different from my day-to-day sat here at my desk, where i'm fairly solitary and self-contained. on the racecourse it's busy, very busy - i'm running about sorting stuff left, right and centre, and there are people to deal with everywhere. so at various points during the course of the festival you'll catch me at my most rantingly misanthropic and also being engagingly sociable and generous - it brings out the best and worst in me... but i wouldn't miss it for the world. it's the most hope-filled place on the planet and i love it.

King for a Day from Mark Waddington on Vimeo.

as ever, i missed almost everything that i wanted to see and hear there, but of the stuff i did manage to do my highlights included skiving off from the big sunday service to meet up with stevie B, moira, ian, steve and andrea; the wild rumpus; people surprising themselves with just how well their lino prints came out; two great sessions of pecha kucha; meeting simone lia [and managing to not embarrass myself too much in the process]; luke leighfield in the underground venue; billy bragg's encore of tank park salute and a new england [i'd missed the rest of his set]; pies from pieminister; the methodist art collection, which is breathtakingly good; a slightly tiddly conversation with mike r, del and grace; willie williams' lumia domestica; and my wife and kids who i know are brilliant but who still manage to surprise and amaze me...
Posted by at 5:25 AM