...[as seen below] are awaiting your attention at the gb visual arts flickr pages

big kudos to the redoubtable lloydy for scanning them all [over 350 of 'em!] 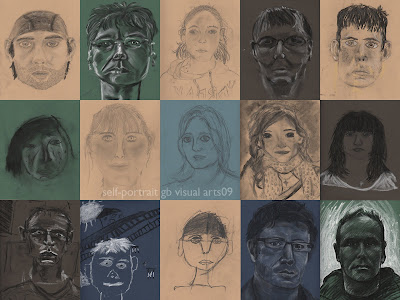 ...and have a read of this blogpost, which manages to explain very eloquently - and much better than i ever could - why greenbelt is such a great festival...]
Posted by at 8:27 AM No comments:

i've been meaning to post more about greenbelt, but to be honest i'm finding it a bit hard to do the festival justice...
there's so much that goes on there, and it's such a rich experience, and i'm probably not that great with words - it's kind of hard to communicate it adequately...
[i'll have a go though...]
one thing that i have noticed in a lot of the media coverage of the festival is the way that gene robinson's appearance has been made to sound very divisive. that certainly didn't seem to be the case on site, as at the festival itself there was very little aggro or visible difficulty around him or his talks.
in some reports there was a lot of talk about folks boycotting the festival because of his presence, but ticket sales and attendances were up on previous years, so if there were stay-away protesters they didn't make much of an impact...

this year we did the self-portrait thing again and it was just as popular as last time. there were more of us involved in running it this time, with a crack team of artists - mark, dave, simon, wanja and rich - supplementing the brilliant team of volunteers - ed and liz, deidre and dominic, dan and sara. we had about 350 draw-ers inover the weekend and they produced some really great drawings - it's really rewarding to see folk surprising themselves with their own work! we're hoping to get most of the drawings up on the greenbelt website as downloadable desktop wallpapers sometime soon.
i'll let you know if and when they're available for download, but in the meantime here's a few samples to whet your appetite...! 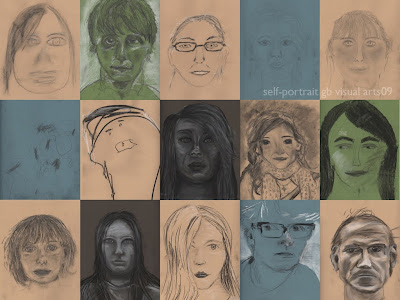 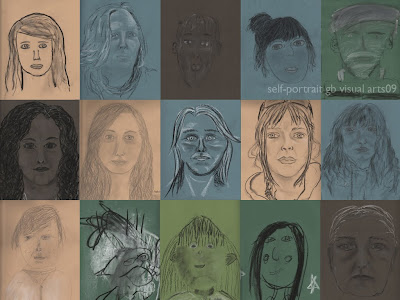 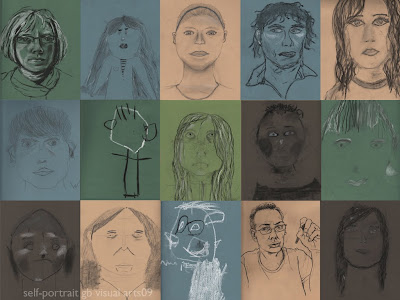 other things that we ran this year were '(shhh!)' - an hour of no talking and quiet tuneage [dj-ed brilliantly by matt stevenson] with folks invited to come along and do something creative, and the inaugral photoflash swap - an open exhibition for festival punters with a big swap at the end [bring one of your photos, take someone else's home with you]
both events went really well, with the photo swap turning out to be a very sociable and enjoyable way to end the weekend... there was a great buzz around the event with the exhibitors really getting into the swing of the event and spending a long time before and after the actual swap chatting and discussing the work. very pleasing...

we're back from the greenbelt christian arts festival.
throughout the year i've been involved in the festival organisation as the deputy visual arts co-ordinator bloke, and for the first time sue worked at the festival as a volunteer on the info desk in the hub [greenbelt's dedicated visual arts and literature venue]

i'll post a more detailed report later maybe, once i've got my head around everything that went on there, but in the meantime here's a list of my festival highlights...

billy childish
the welcome wagon [missed them on the mainstage, but caught them in the more intimate performance cafe venue and they were superb]
dans le sac vs scroobius pip on the mainstage.
gav mart and the saturday vandals in the hub.
david shillinglaw - painting 'live' at the new leads event in the hub and up on the grandstand... fantastic.
the visionaries exhibition [jaw-droppingly great]
our photoflashswap which went off brilliantly well for a first stab. we'll definitely be doing it again in 2010...
pie minister [serving possibly the finest pie and mash on the planet]
stan's cafe - all the people in the world exhibition [terrible venue but a great show]
camping with good mates, and meeting up with old friends [cliff, matty, tonymate and cathy, stuart, jenny...]
the va volunteers who are an awesome bunch

update : i forgot to include haronell and dubb in the proost lounge in my highlights list [missed dubh as i was dragged out to the music store while he was on...]

meantime this review of the festival from artrocker magazine is pretty much on the money imho. sums up why greenbelt is great so much better than i ever could... :-)
Posted by at 1:53 AM 2 comments: