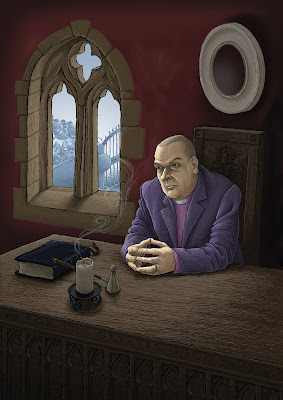 so we just got back from wales, where we'd been to attend the opening night of the 'engeid' easter exhibition in colwyn bay. it's a bit of a spectacular thing to be honest, with a group of dedicated volunteers renovating the ground floor of a disused hotel and transforming it into a gallery on a shoestring budget. it's a stunning achievement, and the art that's gracing the place is equally impressive.
forty local and national artists are involved, and each of us have been given a passage from the easter story to work with. the aim of the show is to try to reclaim some of our lost spaces and stories - so it's not an overtly 'religious' show, but it is very moving and though-provoking. 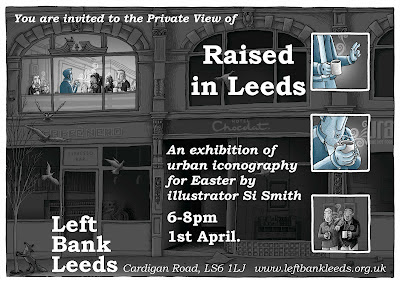 i have a little show at left bank coming up during holy week [1-8th april]
let me know if you'd like to come to the private view [details above...]

so... i've been working quite hard of late.

i've taken on a lot of 'proper' illustration work [ie the sort of work that pays] but on top of that i'm trying to do stuff that feeds my soul a bit too. i'll blog about a couple of things that i'm involved with locally next week, but in the meantime i've just finished a piece for an exhibition in north wales this easter.

gav mart was my co-curator on the advent show here at leftbank back in december 2010, and he's now living near llandudno and working as a pioneer bloke for the methodist church.

under the banner of engedi arts, and for his first big event there, he's curating a stations of the cross show in a disused hotel - it'll be great. 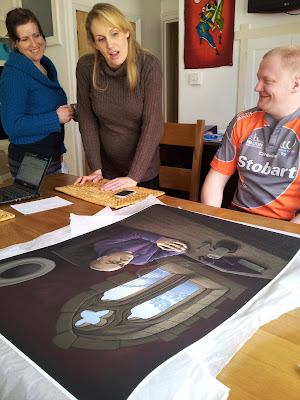 today he took delivery of my piece [sent direct from the printer, so i've not seen the printed version myself yet] and there it is on his kitchen table... [with jo, pips and alan looking on]
i'm really looking forward to seeing it in the flesh when we go down for the private view...

if you're in the area over easter, or know anyone who will be, bob in and have a look. the opening times are on the engedi website and there are loads of events and things going on during the show's run that would be well worth getting to if you can...
Posted by at 11:37 AM No comments: